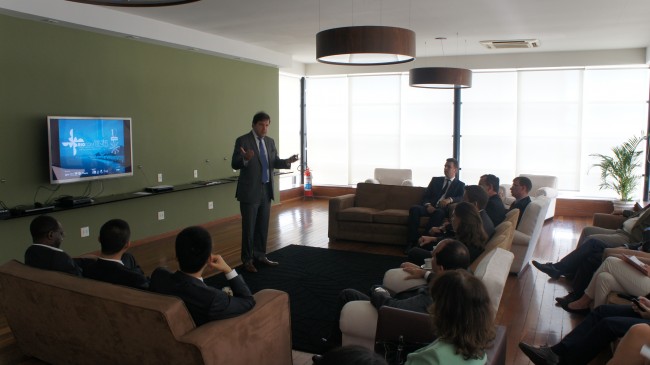 Representatives from consulates of cities composing the World Energy Cities Partnership (WECP) were gathered this morning (17/09) to get to know the deatils of the entity’s annual meeting, which takes place this year in Rio de Janeiro from October 25 to 28. The presentation, made by Rio Negócios, was made to promote the alignment of initiatives for the meeting. WECP is an institution formed by 23 cities in 19 countries which have energy as an economic vector to share their best practices. Of the represented countries, six are among the top 10 oil producers in the world.

The consuls and their representatives were presented to the schedule and new features of the carioca edition, which included for the first time the presence of commercial delegations from the WECP member cities. “The idea to include official delegations from the cities is to potentialize the results of WECP beyond exchanging best practices and technical cooperation”, informs Jeferson Soares, Energy Director for Rio Negócios, entity responsible for the event’s Brazilian production. To reach that goal, in parallel to the WECP General Assembly there will be an edition of Rio Conferences and networking events with global leaders, executives, investors and authorities.

The WECP Rio Conferences edition will have six panels focused on three themes – oil & gas market, urban tranformation and research & development. The conferences will take place at the GE Auditorium, in UFRJ Technology Park, and one of the OTC auditoria, in Riocentro.

Rio Negócios expects to gather around 400 participants from 150 domestic and international companies related to the oil & gas sector, with a focus on operators, suppliers and representative and academic institutions. There are 16 institutional and commercial delegations already confirmed from the member cities, 10 of them led by mayors. Among the confirmed cities, seven are from countries among the top 10 oil producers globally.