Rio Negócios and Facebook, together with StartUpRio, in a pioneering partnership, announced today the launch FB Start, a program to support Rio de Janeiro startups developing apps for mobile devices. The participants will have access to a free package of tools and services, through a partnership between Facebook and several companies. “Rio Negócios and StartUpRio are Facebook’s first partners on FB Start, inside or outside the US, and we are excited for what’s to come of this partnership”, declared Renato Santos, Latin America FB Start manager. 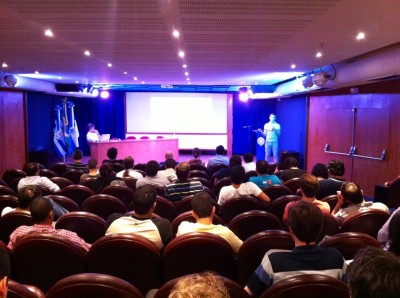 The companies partnered with Facebook  will cede use licenses of their sortwares for periods spanning three to 12 months, advertising and Parse – platform that offers services for developers to make apps grow in a scalable way – credits. Besides that, the selected startups will have consulting in the development of their apps with Facebook engineers through videoconferences and will get to partcipate in the group giving support to developers throughout the project. “Facebook understands the challenges faced by a startup because it was one ten years ago”, said Santos.

The program is focused on two verticals: basic – for beginning startups, with no finished products – and advanced, destined for companies with already created apps. In the basic vertical, selected startups with be entitled to USD 20.000 in credits and services. In the advanced startups model, the number can go up to USD 60.000. The Rio edition of FB Start will have the participation of two main office Facebook employees, based in the US. Interested parties must apply at http://fbstartriodejaneiro.splashthat.com

For the presidente of Rio Negócios, Marcelo Haddad, one of Rio de Janeiro’s vocations is digital entrepreneurship. “This Facebook program in Rio reflects the work to turn the city into na innovation hub. I’m sure that this work with Facebook will give the sector a huge boost”.

FB Start is part of the “Facebook for Entrepreneurs” project, acting in the development of Brazilian entrepreneurs in four pillars: startups, communities, youth and business orientation.