Inside: Provisional regulation 615, which regulates the payment of mobile phones in the country


A MP 615 will provide the use of banking services for those who do not have a bank account, to make purchases, transfer money, and payment by credit card.

Oi: Offers mobile payment services since 2007, with the credit card Oi Paggo. In 2010, the operator formed a joint venture Cielo Paggo Solutions, dedicated to develop this type of service. In 2011, they launched the OI credit card in partnership with Banco do Brasil (until February 2013 were issued 600,000 cards in 12 states). This May they finally launched OI´s portfolio, a re-chargeable prepaid card that lets you make purchases in more than a million establishments which are registered with Cielo, to recharge your minutes with a OI post paid plan, transfer money to other users and and ATM withdrawals from the Banco do Brasil.

Tim: In January was announced a partnership between box and Mastercard to offer a prepaid card that allows you to make purchases and other financial transactions using a mobile phone or ATM card.

Vivo: Launched Zuum in May which is a service via mobile phone by Mobile Financial Services (MFS), which is a joint venture between Telefonica / Vivo and Mastercard. Their target this year is for them to reach 200,000 clients throughout the country.

There are also applications for payments from companies that specialize in online transactions, like PagSeguro and PayPal, and credit card issuers like Cielo and Redecard. Startups like Zoop, Akatus, PicPay and PagPop have started to explore business opportunities.

Zoop (company that Rio Negócios recently attracted to the city of Rio de Janeiro) offers a model of widespread mobile payment in other countries, using a tablet or an ATM machine. 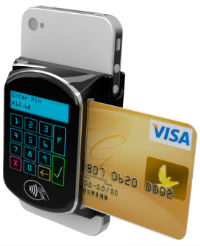 The Zoop Machine, attached to the iPhone.

Some data shows the potential of the sector and the opportunities of attracting and developing new businesses and technology:

1)  Data from the consultant company Data Popular show that there are 56 million people in the country that do not have a checking account (4 in 10 Brazilians) that circulate US$300 billion a year.

2)    Data from the Consulting company Gartner show mobile payments that took place in Latin America in the amount of $2.5 billion in 2012 (from approximately 4,5 million users), value that in 2017 will be more than US$16 billion, from 17 million users.

3)    According to Gartner, by 2016 approximately 450 million people in the world will adhere to mobile payments.

7)    The sector also showed sales records of US$11 billion in 2012, 68 million in bank transactions, with 86% of the users considered satisfied.

8)    Brazil has 264 million mobile phone users (penetration 130% in the Market), considered the fourth country in the world. Until 2014 all major Brazilian cities with have 4G coverage.

9)    According to Gaia Creative, mobile data traffic will grow 19 times in Brazil between 2011 and 2016, representing an average annual growth of 79%. The average speed of the connections will grow 11 times in the same period.

Click here to read the interview with Fabiano Cruz, CEO at Zoop, and supplier of equipment for mobile phone payment.